Over the past two years or so, I’ve managed to fill two or three sketchbooks with studies of guitarists – usually flamenco guitarists. All of the drawings were made from YouTube videos or Web images and the average time spent on each was around three-quarters of an hour. Initially, they were done simply as drawing exercises with the main aim being to record the image as accurately and economically as possible. 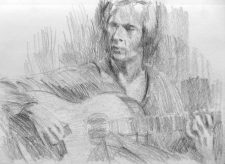 Eventually, I began to experiment with drawing technique to try to suggest the energy and brittleness of flamenco music. The hands of the classical or flamenco guitarist are a fascinating study in themselves – especially the left hand with its strength and flexibility, the square-shaped fingertips and the compositions which the hand creates holding down a chord or fingering a scale passage. The instrument too is a challenge to draw: getting the perspective and proportions correct is difficult enough but trying to find ways to depict the fingerboard or the intricacies of the machine heads without drawing every fret, string and gear is more difficult still.

The benefits of attempting a lengthy series of studies on a narrow theme are well worth the time and effort involved. They range from the trivia of technique (which makes/grades of pencil and paper gave best results) to the compositional possibilities of a subject which at first sight  does not seems to offer too many options.

I’ve used a number of these drawings as studies for paintings and in a future post I will show how Photoshop can be used to bridge the gap between a pencil study and a watercolour painting.

The Drawings gallery contains a selection of these sketches.